You are here: Home / Cats / Cat Health / What to do if your cat ate rat poison

If your cat ate rat poison, he requires immediate veterinary help. Rat poison toxicosis can lead to a lethal outcome in cats because of a few early signs and fast performance.

In this article, you will learn about the signs and treatments of rodenticide poisoning in cats. 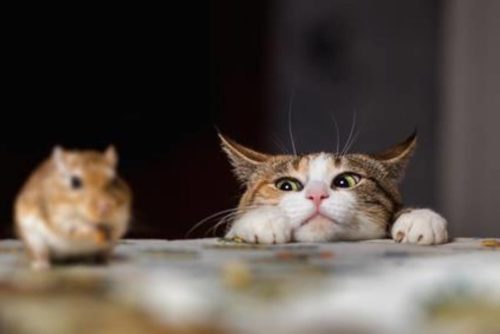 IMPORTANT: Visit a veterinarian immediately if you think your cat has eaten rat poison. Early steps are crucial for successful treatment. Bring the poison package with you.

How does rat poison work?

There are different kinds of rodenticide on the market, but most common ones are anti-coagulant rat poisons. Their active ingredients, such as brodifacoum or warfarin, prevent blood from clogging. It eventually leads to internal bleeding and death of the rat.

Be aware that early after ingestion, there may be no signs at all. That is, even if you only suspect your cat has eaten rodenticide, do not hesitate to visit a veterinarian, instead of waiting for signs to appear.

There are other types of rodenticides, too. For example, active ingredient bromethalin has become popular recently. It affects the brain, resulting in neurological signs.

Signs of bromethalin poisoning in cats

It does not matter if you only suspect that your cat might have eaten a rat bait. You must take your cat to an emergency veterinarian immediately since the early treatment is the most successful.

If possible, bring the package or brand name of the rodenticide ingested. Treatment depends not only on the type of rodenticide but also on its active ingredient and concentration.

Depending on the severity, your cat may be treated inpatient or let home the same day. Make sure to follow your veterinarian’s instructions precisely.

Likely you will need to restrict your pet’s outdoor access and activity. However, the most essential thing, you must prevent your cat from eating rat poison repeatedly.

How to prevent your cat from eating rat bait

Cats can eat rat poison in several ways. Most commonly they find rodenticide set up in their own home or during their outdoor ventures. Secondary poisoning, that is, poisoning after hunting down a sick rat, is less likely, though possible.

Intentional cat poisoning by discontent neighbors is not a rarity, also, even though dogs are more frequent victims of this. The stupid thing is that intentional poisoning is hard to prove.

But can you prevent your cat from eating rodenticide?

Treating rodenticide poisoning is successful only if you seek medical help early after the ingestion — within 4 to 24 hours, depending on the poison in question. Preventing your pet from ingesting rat poison in the first place is a much safer and easier thing to do. However, if your cat ate rat poison despite all the efforts, visit your veterinarian immediately.