You are here: Home / Did You Know? / What are natural enemies of cats? 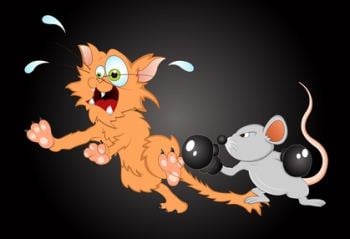 In our articles, we often talk about the necessity to ensure your cat is feeling secure by providing him or her with elevated locations, placing litter boxes in secure areas as well as other methods to ensure your cat feels safe.

But feels safe from what? Indoor cats rarely encounter things that are more dangerous than vacuum cleaners, tumble dryers or toddlers. But the truth is that their instincts still dictate that they should always be cautious of rival cats and larger predators. Let’s find out what are the natural enemies of cats.

The top of the food chain? Who would want to eat a cat?

You have probably heard of a food chain; it defines who eats whom. In most cases, the smaller the individual is, the lower on the food chain it resides, unless it has a specific talent. For example, eagles are able to fly, humans are able to think, and cats are able to climb.

The ability to climb along with being fast and discreet wherever they go is the main reason why cats are so successful in the food chain, making them the top predator in many locations of the world.

In the most technical sense, there are no natural predators for cats. However, there are some animals that are reported to attack and consume cats frequently for food. Those are predators who:

Typical examples of natural enemies of cats include foxes, coyotes, raccoons, raccoon-dogs  and others of a similar size and similar capabilities. However, no textbooks list cats as a part of these animals’ natural diets, and their reported attacks, while pretty common, shouldn’t be considered the norm. Update: In 2016 a live nest camera in Pittsburgh caught bald eagle feeding a cat to their eaglets.

Are dogs and wolves natural enemies of cats? While attacks are reported, cats are not normally hunted and consumed by dogs or wolves. Wolves are social animals and target prey that is significantly larger than themselves, bringing it down using teamwork, thus providing food for the whole group. There wouldn’t be much meat to share from a single cat, even if wolves managed to ambush one.

But the above does not mean that cats are not afraid of larger predators. Quite the opposite. The fact that they always take precautions is an important contributing factor to the fact that cats are top predators almost everywhere they live.

This means that the major part of providing a stress-free life for a cat in your home is to add some places for your cat to climb. Even though there aren’t any predators in your bedroom, your cat will be pleased if its instincts can still be satisfied by having an escape available.