You are here: Home / Cats / Cat Behavior / Does your cat know and recognize his name?

“Do my cats understand their names, or do they just come when they hear my voice saying random words” is a question that cat owners often ask themselves. Conveniently, a recent publication in Scientific Reports tried to answer just that question.

At first, the idea that cats recognize their names seems undeniable. After all, when you call them, they come or turn their heads toward you. But if you think about it for a second, you might not be so sure about what they actually respond to. Besides, you know scientists. They are never satisfied with “everyone knows that”! 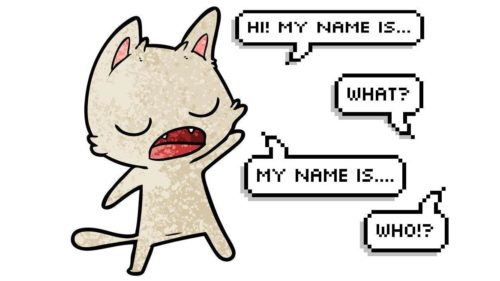 We have three cats ourselves, which is not much by any standards, but whenever we call one of them, nine times out of ten all three come running. Do they come because they hear our voice? Do they recognize the tone of our voice? Or maybe a sequence of a fridge opening and then hearing their owner’s cheerful voice?

What if … what if cats respond to their owner’s voice and tone, instead of their name? What if a cheerful two-syllable word would create the same response as a cheerful “Daisy!”? Would she respond if you called “Lazy, lazy, lazy, come here!”? She likely would.

Scientists from the University of Tokyo discovered that cats do understand human vocal utterances and can discriminate their names from the names of other cats and from nouns with the same tone and length.

Some news websites reported the study with titles such as “Scientists talked to cats…” and “you won’t believe what they heard.” Slightly exaggerated.

Did scientists really talk to cats?

So, what did scientists find out about cats recognizing their names? Before answering that, we should first examine what they did. As suspected, they did not actually talk to cats; they played recorded lists of words to cats followed by their names.

Words preceding the cat’s name were either nouns similar to the particular cat’s name in length and tone or names of other cats from the same household. The words were recorded not only by the owners of the cats but also by strangers. This helped to measure the possibility that cats may just respond to their owners’ voices.

While playing the records, scientists scored the responses of cats in several ways, including by movement of the ears and head and vocalization.

The main idea was that cats are likely to respond to human voices (especially their owner’s), though, if words are gibberish to them, they would soon lose interest. Subsequently, once cats lose the interest, they must regain it upon hearing their name. Under certain conditions they would recognize it.

Do cats recognize their names?

So, what did scientists find out? The short answer is: if they care enough, cats CAN understand their names.

The claim goes slightly further, because it also suggests that cats can discriminate human utterances, which might have some implications for successful training — giving commands might not be useless in cat training — they might be capable of telling the difference between “don’t you dare!” and “sure, go ahead!” even if you say both in a calm manner.

The longer answer is that cats did regain interest in the recording upon hearing their names in this particular study. At least, those who lost it in the first place and those who live in households did, which suggests that cats can discriminate their names from words that are similar in length and tone.

Not all cats responded equally, though. First, cats residing in cat cafes did not. This might make sense if we assume that cats in cafes care less about their names, but it requires additional investigation, because the study focused on a single cat cafe.

Another group worth mentioning is cats who live in multi-cat households. They were less likely to lose interest upon hearing the names of their roommates. This, however, does not mean that cats cannot discriminate their names from other cats’ names. One who did lose interest actually regained it upon their own name. What is more likely is that cats in multi-cat households are used to responding to all names, simply because if owner calls any of them, it’s worth it to check why.

Thus far, the study has demonstrated that cats recognize their own names when owners call them. But what if it depends on the specific owner’s tone? That is why the scientists also used recordings of voices that are unfamiliar to the cats. They found that, even though the amount of response was lower, cats clearly recognized their name uttered by strangers.

This suggests that while the component of the owner’s voice is important when a cat responds to their name. But it’s not all there is. Cats are capable of recognizing their names phonetically, based on how the name sounds.

It should be noted that the mentioned study is actually the first time scientists tried to test whether cats recognize their names. Surprisingly little study has been done on cats’ ability to communicate with and understand humans.

Thus far we know that cats can pick up human emotions, understand hand gestures and pick out their owner’s voice from a stranger’s. Now we not only know that cats do recognize their names, but we also have solid ground for communicating to cats through verbal cues. It may not be the same as talking to them, but it is almost just as good.