You are here: Home / Cats / Cat Behavior / Why cats have whiskers on their forelegs

Did you know cats have “whiskers” on the backs of their front legs? Take a look at your cat’s forearms, and you’ll notice a few small tactile hairs growing on them. These are called carpal vibrissae as in the Greek carpus, meaning wrist.

But what are they for? Why do cats need whiskers on their legs?

Let’s first remind ourselves what whiskers are and what do they do. Whiskers are thick hairs growing inside a sensory cell, and their main function is to detect movements. And they are good at it.

Whiskers are so sensitive that even tiny air currents can be detected by facial whiskers, assisting cats in hunting, navigation, and measurement taking.

However, cat’s do not measure openings with their carpal whiskers. Their main function (likely not the only one) must be associated with hunting.

Scientists added electrodes to cats’ nerves, sending signals from their leg whiskers to their brain, and found that cats are exceptionally good at detecting direction and strength of the movements of objects they are “holding.”

Leg whiskers turn out to be irreplaceable aids for cats during hunting.

Have you seen a hockey goalie covering a puck and then looking around in a panic? That is because he (or she) is not able to see through their glove and must reassure themself that the puck isn’t on the loose.

It’s the same for a cat who covers a mouse with his paws. He is no longer able to see it, but he can feel it. You could say a hockey goalie would be thankful for a glove that had a whisker or two inside of it.

Whiskers detect even tiny moments of the prey. They help to check whether the prey is dead or alive and if or how it is moving. 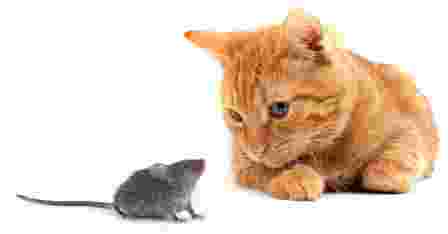 A similar thing happens when a cat is holding prey in his mouth, which is too close for his eyes to observe fully.

Whiskers on forearms are very crucial for cats living outdoors and catching food for themselves. Indoor cats do not hunt and get food for free. Does this mean they do not need whiskers on their forearms?

The significance of forearm whiskers is, of course, lesser for indoor cats, but hey, they still use them. Next time you play with your cat, let him pounce on a toy and hold it under his paws. Then, try to pull the string lightly as if the toy is attempting an escape. You’ll see that your cat realigns his grasp according to information he receives from his leg whiskers.