In our country, there is a song where a cat tells the story about his life and mentions that he used to see over a kilometer at night and three at dawn when he was young. Impressive, even though it is only poetry and likely some other round number would be used if the author preferred miles over kilometers.

Regardless, are cats really good at seeing distant objects? Could they see over a mile? How far can a normal cat see? As it turns out—not very far.

Let’s clarify something first. Asking how far someone can see is not a meaningful question. You are likely to see a large hill over tens of miles, but can you see a house on the slope? Not without binoculars. This is why ability to see over a distance is not measured in kilometers or miles, but a value of cycles per degree (cpd) is used instead. Don’t worry about the degrees; you don’t have to recall your trigonometry to grasp it (although you can dive deeper if you wish). All you need to know is that the acuity is measured as a ratio of object size over distance to that object.

Which makes sense. Based on pure mathematics, you could see a boat as a tiny dot at 11 kilometers (6.8 miles) (assuming the Earth was flat). But you would only be able to see two people sitting in the boat if you were about 1.6 km (1 mile) away. And to notice that one of them is holding a book, you would have to be 60 meters (200 feet) away. All with the same set of eyes that have an acuity of approximately 50 cpd.

Are cats better at seeing distant objects than humans? No. They’re not even close. Experiments have concluded that the acuity of cats is around 8–9 cpd, about five times worse than ours.

How can one measure the visual acuity of cats if it relies on identifying letters on a chart and calling them out to a doctor? One clever way to test vision in many animals relies on training.

A cat is walking on a plank that separates into two pathways at a measured distance away from two posters that have either vertical or horizontal lines drawn on them. The cat must choose one path in advance; he cannot go for both. As he has previously learned through training, the correct path will provide him with a treat. This setup allows experimenters to change the distance to the posters and the width of the lines to register how far a cat can distinguish them, and thereby determine the characteristics about the animal’s vision.

But what do these numbers mean? Do cats have approximately five times worse ability to see over a distance? Basically, yes. To illustrate, let’s return to our boat example.

We might feel superior over cats for our ability to see farther, but deep down we all know that a cat’s vision is superior to ours in some ways—such as seeing in the dark, to give the most famous example.

Cats can see with one sixth of the light that we need, which is one of the superpowers that place cats among the most successful predators on the planet. And just like any superpower, it comes with a cost.

The cost for seeing in the dark is well worth it

The back of a cat’s eye is lined with a reflective layer which helps bounce the incoming light back to photosensitive cells, stimulating them more than once. Thus they get more from the same amount of light. Unfortunately, this overstimulation also blurs the image: think of it as printing a page on the same piece of paper over and over again.

Another thing is that, in order to not overstimulate the photosensitive cells, cats’ eyes have a lower density of those cells (and thus a lower resolution). Also, their lenses, in order to collect more light, are less able to adjust their focus for distance.

The main takeaway is that cats’ eyes have lower visual acuity, especially when it comes to viewing distant objects, as a trade-off for better vision in the dark. But that makes sense: evolution can afford to shape some superpowers at a cost of other abilities that are of little or no practical use to the animal. For example, birds can fly, but their wings are no good at carrying things. 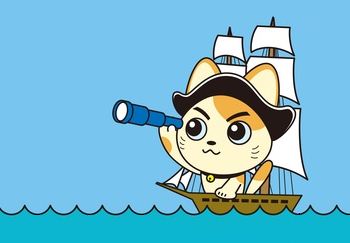 What use would clear vision over a mile be to a cat? If cats preyed on deer it would be of good use, but their main targets are smaller mammals, like mice, which you probably can’t see over a distance no matter how good your vision is.

Your cat’s best tools for hunting are hearing, sense of smell, and knowledge about where and when the prey is out, how to remain undetected by the prey, as well as the patience to sit and wait in ambush.

Vision is of lesser importance until the pounce itself. And when a cat jumps on a target, it’s rarely farther than a meter away, a distance which previous research found the cat’s vision to be the most acute. No surprise, it is the distance which they look at things most often.

Cats may not have good vision over a distance, but rest assured: when you enter the room, your cat can still see you well enough.