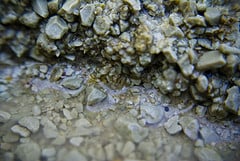 Clumping cat litter is still one of the most popular litter types in the world, even though its popularity has decreased in recent decades.

Clumping litter is no longer the only choice on the market. In addition, some concerns exist about how clumping litter affects your cat’s health, as well as its footprint on the environment. However, it’s still the most popular litter type; you might think that so many people can’t be wrong, and this type of litter must be good. We have tried clumping clay litter (as well as pine cat litter, silica, and clay litter) extensively, and we can agree that it is OK.

It’s easy to use, it’s economical, and most cats use it without objection. There are some drawbacks, too. Although none of them are major, they are significant enough in our opinion to affect the popularity of clumping clay litter in the future.

But let’s start with the positive, as we believe lots of you are already sick of bad news seen on television.

Easy and economical side of clumping cat litter

Clumping cat litter is among the easiest litter types available. It’s not as easy to use as silica cat litter (read our silica litter review here), but still, all it takes is to remove solid wastes and clumps twice daily.

One of its most important ingredients is bentonite—the same material that is used as a binder in cement, and it does the same job here. It expands when moistened, binds other materials together, and turns granulated cat litter into solid clumps that are easy to remove from the litter box.

Depending on the brand, though, the litter may not clump very well. Furthermore, if you scoop like a bulldozer, the clumps may collapse back into granular form that won’t clump again. Unfortunately, it’s very hard to remove this broken-down material and, when it has accumulated, there’s no way to remove it except to dump the whole box.

Another great thing about clumping cat litter is that it is efficient to use. When you remove solid clumps, the rest of the litter that has not yet come in contact with cat urine or feces remains in the box. This avoids having to throw away litter that may still be used.

Also, clumping litter allows you to monitor how much urine your cat is producing, both in terms of the frequency of urination and the amount of urine produced in one visit to the box. Why is this important?

Clumping litter is dusty and sticky

Please note: we are talking about clay litter here. We have also tried clumping litter made from fiber, and it sure is less dusty.

Many people are concerned about inhaling the dust and having it accumulate in our lungs and those of our cat. Despite the popularity of those claims, there is no real scientific or clinical evidence to support them. None. Although inhaling bentonite is not the same as inhaling fresh air, during the long process of evolution, animals’ bodies have learned to extract stuff they do not require; therefore, you should not be concerned about health problems for you or your cat if you use clumping litter. 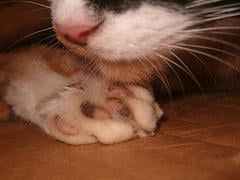 Another disadvantage of clumping litter is its stickiness. Small granules are made to clump and stick together. Unfortunately, they also stick to your cat’s paws. The pieces of cat litter will eventually be everywhere—on the window sill where your cat sits, beside your cat’s food bowl, and even in your bed if he sleeps there.

Also, cats do groom themselves a lot. It’s a natural behavior in order to stay clean. They lick their paws often and, if a piece of clumping litter has stuck there, your cat may ingest it.

On the other hand, we already mentioned that clumping litter lets you monitor your cat’s urination habits, which is a huge advantage.

Green is fashionable, clumping litter is not

Another reason we think that clumping litter will lose its popularity is that it’s not “green.” Not even close. Nowadays, “green” is fashionable. Green energy substitutes more traditional types of energy, hybrid or electric cars tend to replace huge fuel-guzzling monsters, and clumping litter might step aside in favor of greener types of litter.

How is clumping litter “un-green?” It is not biodegradable, since it is practically a cement. You can’t compost it and, if you throw it away, it will make its way to the dump (if we’re lucky) and will stay there forever, and our grandchildren will have to live next to large piles of clumping cat litter.

You can’t flush it down the toilet, either. It won’t dissolve, and it will likely clog your pipes after it expands in the water.

A clumping litter exists, however, that is made of plant fiber and IS green. We will talk about this type of litter very soon.

And why should you choose clumping cat litter?

After reading all of the drawbacks to clumping cat litter mentioned above, you might wonder why anyone would choose this type of cat litter. Well, because it’s easy, and those drawbacks are minor—even the opinion that clumping cat litter is unhealthy. (It’s not.) From a health perspective, it does allow you to more easily monitor any changes in your cat’s toilet habits, which is a good thing.

Clumping cat litter is the best choice for you if you are busy, if scooping and refilling litter all day long is not your passion, and if you don’t mind a little cement on the floor.

This article is a part of our cat litter reviews.