You are here: Home / Cats / Cat Health / What are benefits and losses of spaying and neutering a cat? 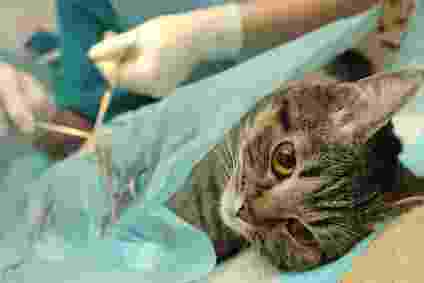 Spaying or neutering a cat seems a very responsible step for pet owners to take, and pet owners are increasingly viewing this surgery as an obvious thing to do. That’s good.

But have you ever wondered whether there are two sides to the story? In this article, you are going to learn not only the benefits of spaying or neutering cats but the disadvantages as well.

The most obvious benefit of spaying and neutering is an ability to control the cat population, particularly the part of the population that consists of unwanted cats in shelters and on streets.

If you do not want to add to those numbers, spaying or neutering your cat is the way to go. Also, many owners of female cats can eliminate the task of finding homes for countless litters of kittens just by spaying their cat. Even if those owners do find good homes for all of the kittens, these litters still add to the overall population and reduce the chances of finding homes for shelter cats.

Unlike many stereotypes, it’s a responsibility of owners of male cats, as well. Male cats do not get pregnant, and many owners do not know if their cat is siring litters. But they can be. If there are females in heat, a male cat can sire a litter as frequently as every day, and most male cats who go outside, do.

How does spaying and neutering affect your cat’s behavior?

Spaying and neutering alter the behavior of cats enormously. The effects are most apparent in male cats; however, females change their behavior as well.

In male cats, most of their sexual behavior is initiated by testosterone, which is produced by their testes. Since neutering is actually a removal of testes, the testosterone is no longer produced; therefore, several behaviors fade out naturally. Those include:

Female cat owners have a less troublesome life, but they have their own worries—the heat cycle. When a female cat is spayed, she will no longer come into heat, and the following symptoms will no longer bother you:

You may read a more complete list of female cat heat symptoms here. They all will go away after your cat is spayed, as will the worry of your cat getting pregnant. Many owners of female cats choose to overcome this issue by using medicine to prevent their cat from going into heat. Studies, however, show this type of medicine increases the risk of reproductive system disorders, including uterine cancers. Veterinarians deal with issues of this nature quite often.

Studies also show that both genders become less active, more friendly, and more playful, and they tolerate handling better. In addition, neutered males are reported to seek more attention compared to intact ones.

You can find out more about behavior changes in cats after spaying and neutering here.

Note: if you spay or neuter an older cat, some of the behaviors listed above may not change without an additional training and environmental modifications. Or, these behaviors may disappear only gradually over several months. However, castration is still the most significant tool in changing unwanted behavior in cats.

How can spaying or neutering affect your cat’s health?

Besides altering your cat’s behavior, spaying and neutering influences your cat’s health as well.

First, it’s a surgery. As with any surgery, it carries some risk of complications both during the surgery itself and during the postoperative period.

Spaying a female cat is more complex than neutering a male cat. Thus, the associated risks are higher for female cats, and the recovery period is longer for them. On the other hand…

Spaying and neutering eliminate the risks of developing ovarian and uterine tumors in female cats and testicular cancers in male cats. Because those organs are removed, there is no possibility of developing related diseases.

Spaying or neutering a cat reduces the risks of mammary cancer in females and prostatic cancer in males. The risk is reduced even further in female cats if the cat is spayed before one year of age. In male cats, neutering also reduces wandering and fighting with other cats, as mentioned above, which in turn minimizes the spread of infectious and invasive diseases, fleas, and injuries caused by fighting.

Spaying and neutering, however, may increase the risk of developing urinary incontinence. This risk is extremely low—much lower than in dogs—but it does exist. In addition, neutered male cats are at greater risk of developing diabetes.

To sum up, we think you should spay or neuter your cat if you are not planning to breed her or him. In our opinion, that’s the only argument for or against doing so. All of the other cited advantages, included improved behavior or reduced or eliminated risk of certain diseases, are way too one-sided as arguments in favor of spaying and neutering cats.