You are here: Home / Cats / Cat Health / How to easily trim your cat’s nails 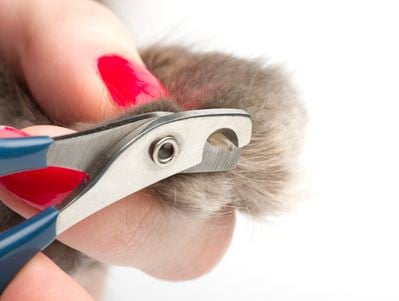 Trimming your cat’s claws may sound frightening. However, after proper training, doing so will be easy even if you do it alone. In this article, you will learn how to trim your cat’s claws, as well as how to hold your cat during the procedure. You will also learn how often his claws should be trimmed and how to train your cat to accept claw trimming nobly.

Do all cats need claw trimming?

If your cat is active or uses a scratching post often, he may be able to maintain his claws himself. Some cats also chew off their claws on their hind legs.

Outdoor cats could benefit from long claws because this is their primary weapon of defense and helps them climb.

If your cat is aggressive, shorter claws could mean less damage; however, trimming them may be dangerous.

How to choose cat claw clippers

To trim your cat’s claws, you will need pet claw clippers that are intended for cats or small dogs. Several types are available. The most common are the scissors style, the pliers style, and the guillotine style.

With cats, most owners find the scissors style and the smaller pliers style clippers to be the most comfortable to use. However, some owners say that the guillotine type, where you put a nail in an opening and just snap, is easier.

We suggest that you go to a pet store and try to hold all three types and see which seems most comfortable to you. If you prefer to buy your clippers online, it’s best to start with the scissors type because it costs less and most folks find it convenient enough. You can also buy more than one and see which works better for you and your cat.

How to trim a cat’s nails 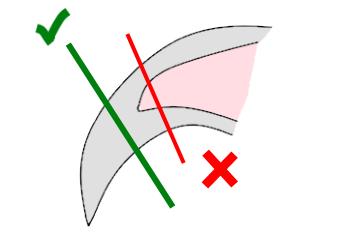 Take a closer look at one of the claws. What you see is a semi-transparent claw and a blood vessel, often called the “quick,” inside of it.

Here’s a simple rule. If you trim through the vessel, it will bleed and cause your cat pain. So, don’t do it!

If you haven’t trimmed your cat’s nails in a while, the vessel will be long, and the trimmable part of the claw will be short. Don’t worry. Trim as short as possible without reaching the vessel; next time, you will notice that the vessel has retreated.

You will be able to trim your cat’s claws shorter and shorter every time until they reach their optimal length. This usually takes two to three trimming times.

How many claws do cats have? Most cats have FOUR claws on each hind paw and FIVE claws on each of the front paws. The extra one is the so-called dewclaw, which is located higher up on the front leg. In nature, the dewclaw aids in holding the prey. Dewclaws frequently grow too long because they are not used when the cat scratches a post.

If you have been keeping track, you know that this results in a total number of 18 nails for a typical cat. However, congenital disorders in which more claws are present are also common in cats. The World Guinness record, set in 2002, is held by a cat that has 28 toes, each having its own claw.

It is necessary to trim your cat’s nails about every three to four weeks. This means that IT IS WORTH IT to commit to training your cat to accept the procedure calmly instead of putting you, the person who helps you hold the cat, and the cat itself into a stressful and dangerous place.

IMPORTANT: Whenever your cat is showing signs of distress or tries to get away, stop moving but do not release your cat (or his paw). You can pet him with the other hand and release only after he calms down. If you release your cat whenever he shows dislike of the procedure, he will learn that resistance works well to stop it.

Do not de-claw your cat

For many, an alternative to regular claw trimming is a de-clawing. This procedure is illegal here where we live, luckily, as well as in most of European Union and numerous other countries. Yet, this procedure is still popular elsewhere, including most of the United States.

The problem with surgical de-clawing is that it isn’t only a removal of a cat’s claws but the last phalanx of its digits as well. Recovery from surgery is painful, and walking afterward can be a hassle, leading to stiffness, lameness, litter box avoidance, increased biting, and numerous pain- and stress-related behavior problems.

You can read more about the effects of de-clawing cats here.

A more humane alternative to de-clawing is gluing nylon nail caps onto your cat’s claws. They come in stylish colors to please any taste. They can be applied in a veterinary clinic, but it’ll be an easy in-home task after your vet teaches you how to do it.

The problem with gel caps is that they must be re-applied about once a month, and before you do so you still need to trim your cat’s claws. The good news is that the trimming alone will greatly reduce the damage your cat’s claws do to your furniture.

As scary as it first sounds, trimming a cat’s claws is easy. After you go through the gradual training process (remember, being patient and avoiding force is the key), trimming your cat’s claws will be as easy as one, two, three… trim, trim, trim… four, five, seven, eighteen.